The persecution of Hedme Castro continues in Honduras – call for donations 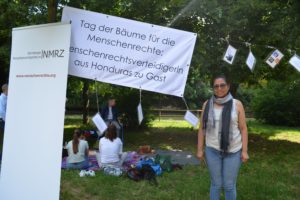 Hedme Castro, director of the human rights organization ACI-PARTICIPA in Honduras, was a guest of the Nuremberg Human Rights Center (NMRZ) from March to September as part of the ESI (Elisabeth Selbert Initiative) protection program for persecuted human rights defenders. The ESI program was set up by the German government in cooperation with the Institute for Foreign Cultural Relations and offers human rights defenders in emergency situations a stay in Germany for six months. After this time, it is expected, the situation in the country of origin will have improved, allowing the individuals to return under better conditions.

In Hedme Castro’s case, this proved to be an illusion. Although she was met by the German embassy upon arrival at the airport, the threats soon began again. Finally, on the night of November 5, 2021, Hedme’s house was set on fire (see photo). Only because Hedme had already left the house a few days earlier, in the face of increasingly concrete threats, was no one injured. Possible perpetrators and the exact cause of the fire are so far unknown due to the inaction of the authorities. However, the act fits into the chain of threats and previous attacks against Hedme Castro and ACI-PARTICIPA, which led her to temporarily leave the country for Germany because of her criticism of the regime’s numerous serious human rights violations.

The Nuremberg Human Rights Center is dismayed and shocked by this brutal attack on the life of our friend Hedme. We will discuss possible further protective measures with those responsible for the ESI program. First, however, it is also simply a matter of getting Hedme a home again. For this purpose we have opened a donation account: 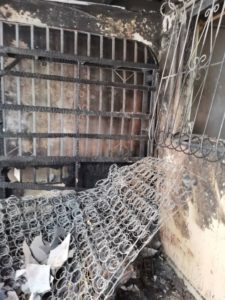 Donations, which are also tax-deductible, can be deposited there with the keyword “Hedme”.

Thank you for your attention to this urgent matter.