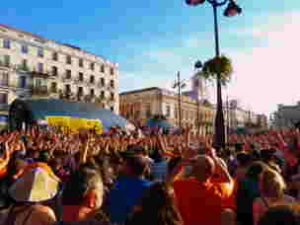 Since 2008, the global economy is experimenting a severe downturn: a deep financial and economic crisis has spread globally. This crisis is having devastating effects on lives and livelihoods across the world, threatening the whole range of human rights, but specifically economic, social and cultural rights. Spain, deeply affected by the European sovereign debt crisis, has implemented tough austerity measures as a precondition for the reduction of public debt, inflated by the constant capital injections made to the troubled Spanish banks. The United Nations Committee on Economic, Social and Cultural Rights, given the context of the economic crisis, decided on May 2012 to have a close look at the situation of human rights in the country, and expressed its concern over reductions in levels of protection afforded to the rights to housing, health, education, and work, among others, as a consequence of austerity measures. The Committee has echoed in its observations the demands of the Spanish society: on May, 2011, protests marches against the current political and economic system were organized in more than fifty Spanish cities. This marked the emergence of a broad social movement, the so-called 15M movement, or the Indignados, that has generated a process of re-politicization of society and placed human rights at the top of the public agenda. At the same time they have identified and denounced the flaws in the current system, the Indignados are experimenting with new ways of ensuring human rights, attempting to create their own communal spaces under the principles of solidarity and self-organization.

To the article: Spain’s struggle for human rights (PDF)