In many countries around the world, human rights defenders are persecuted for their work and convictions. They are put under surveillance, threatened, harassed, and detained arbitrarily; often, they face enforced disappearance, torture, and even death. In 1998, the UN General Assembly adopted the Declaration on Human Rights Defenders. [1] The resolution emphasizes the duty to protect and support human rights defenders in their work (OHCHR, n.d.). Unfortunately, the situation of human rights defenders has deteriorated in recent years. The NGO Front Line Defenders estimates that in 2017, more than 300 individuals were killed because they spoke out about human rights. According to the organization, this constitutes an increase compared to recent years (Front Line Defenders, 2018). Especially female human rights defenders are at risk, since they additionally face gender-based and sexual violence (Amnesty International, 2017). Salil Shetty, Secretary General of Amnesty International, described those recent trends in the following words: “What we are witnessing today is a full-frontal assault by governments, armed groups, corporations and others on the right to defend human rights” (Amnesty International, 2017, p. 5).

One of the organizations concerned with the protection of human rights defenders is the Dutch NGO Justice & Peace. In 2012, the organization founded the program Shelter City. Suzan Goes, coordinator of the program, describes the idea behind the project:

“In many countries, human rights defenders are under threat, and worldwide we can see a trend of shrinking space for civil society. The Shelter City program offers these human rights defenders a temporary safe space, where they can rest, follow trainings and expand their network. We believe this is crucial for them to be able to continue their important work.”

Under the program, human rights defenders are offered temporary protection for three months in a Dutch city. In this time, they can recover and resume their work in peace. In addition, it affords them the opportunity to extend their foreign networks and raise awareness abroad for the subjects they work on.  Twice a year, the organization publishes a call for applications. Last December, the program received a record of 175 requests. “This shows how much our support is needed”, Suzan Goes adds. The participants are then selected by an independent committee. The following criteria are considered during the selection process:

Suzan Goes explains that the organization does not have the capacity to offer family relocation. Therefore, a thorough investigation is supposed to ensure that participation in the program will not have any negative repercussions for family members of the participants.

The Shelter City project defines human rights defenders in the broadest sense: their work has to aim for the peaceful promotion of human rights. Thus, lawyers and members of NGOs, but also artists or poets can participate in the program. The program is open to human rights defenders from all regions and all human rights topics. For example, participants have come from Kenia, Mexico, Thailand, Pakistan, Russia, and Mali, and worked on topics such as LGBTI rights, environmental rights, access to justice, or freedom of expression.

Alexéy Zalensky is one of the human rights defenders who participated in the Shelter City project. As an openly gay LGBTI activist, he was exposed to homophobia and discrimination in Russia, his home country. He decided to participate in the program after he was attacked in the streets for carrying a rainbow sticker, dismissed from his job because of his sexual orientation, and even arrested for participating in a peaceful street event for LGBTI rights. “I was not prepared for so much aggression and discrimination and was overwhelmed by it”, Alexéy Zalenksy recounts. Therefore, he decided to leave Russia for three months.

Another participant in the program is Iyad Haddad. For 30 years he has been documenting human rights abuses against the Palestinian population, most recently for the organization B’Tselem. He is currently working with families and witnesses in the Palestinian refugee camp Al-Jalazoon in the West Bank. “The situation in my country is very bad and not going to change soon. I thought it would be useful to spend at least a month away from the miserable situation under the occupation”, Iyad Haddad explains. “I hoped that after my participation in the program, I could take up my work with new psychological strength, renewed energy and decreased frustration.” For his work in Palestine, Iyad Haddad uses different media for the documentation of human rights abuses, such as witness reports, film clips, and documents from hospitals or morgues. He aimed to improve his skills in handling these instruments during his participation in the program.

Kiruba Munusamy is an Indian lawyer and human rights activist. In her home country, she advocates for the rights of minorities, including indigenous rights, for LGBTI-rights, against discrimination in academia, against the death penalty, and for freedom of expression, amongst others. Her work especially focuses on the rights of Dalits, also known as “untouchables”, who are excluded from the Indian caste system. Dalits suffer from severe human rights violations, including social and economic exclusion, discrimination in the education system, and sexual violence against Dalit women. Kiruba Munusamy, who herself comes from the oppressed community, has been working at the Supreme Court of India since 2014. Because of her public presence, she is generally protected from state persecution. However, as a result of her work she does face harassment from various social actors. One of the experiences crucial for her participation in the Shelter City program took place as part of her commitment to the rights of inter-caste couples: In India, it is nearly impossible for couples from different castes to get married; killings in the name of honor are not uncommon in those cases. As a lawyer, Kiruba Munusamy helped many inter-caste couples. The circumstances of one of those marriages led to her being attacked on the street, leaving her seriously injured. “Hence, in order to support my work and give me a break from the restless situation in the country, I was selected to participate in the Shelter City project”, Kiruba Munusamy explains.

Prior to their arrival, participants can indicate which objectives they have for their stay in the Netherlands. They can choose between rest and respite, training courses, networking, or a combination of these activities. Justice and Peace also offers security training for the participants. In addition, they can sign up for a variety of courses, for instance English language classes or meditation. They also meet with other NGOs, the Dutch foreign ministry, or officials in Brussels. Often, the human rights defenders hold events or workshops at universities, where they raise awareness for the topics they are working on.

Alexéy Zalensky used his time in the Netherlands mainly for regeneration. He wants to study psychology soon and used the infrastructure provided by the University of Groningen to gain further information on the subject. The main lesson he took away from his stay in the Netherlands was the contrast to his home country: “Most importantly I have seen a totally different culture and attitude towards minorities”, he says. Aléxey Zalensky also enjoyed the exchange with other participants and suggests that more space for those encounters could be created. His suggestion for future participants: “Be honest about your feelings and needs.” He advises not to feel guilty if one does not have the emotional or psychological capacities to be very active during the program.

Iyad Haddad initially experienced some difficulties in leaving his home, since he could only depart from Jordan. To get there, he had to cross three terminals. His wife and three children had to stay behind. Iyad Haddad reports to have learned a lot about physical, psychological and digital security, and to have profited considerably from the networking opportunities the program offered: “I met a lot of representatives, leaders, journalists, parliamentarians, donors, human rights defenders and activists. It was a good opportunity for me to link with them.” He also appreciated the opportunity to inform about the human rights situation in Palestine.

Kiruba Munusamy lived in Nijmegen during her time in the Netherlands. “Since one of my primary focuses is to raise global awareness about the inhuman caste system, I took [my stay] as an opportunity for international advocacy against caste-based discrimination”, she explains. During her stay, she attended seminars, human rights classes, and an English language course at local universities, held presentations, and met with authorities like the mayor of Nijmegen and the Indian Coordinator of the Dutch Ministry of Foreign Affairs. In addition, on International Women’s Day she was invited to speak at the “Hague Talks”. Kiruba Munusamy states to have especially profited from the knowledge she acquired in the Netherlands, the renewed strength she gained, and the experience of advocating for human rights on an international stage. “The Shelter City experience was inspiring and life changing. […] For the first time in my life, I was treated as a human with full respect and dignity”, Kiruba Munusamy recounts. Nevertheless, she suggests that the program could improve by linking participants with EU institutions and international organizations working for the same causes within the human rights framework. 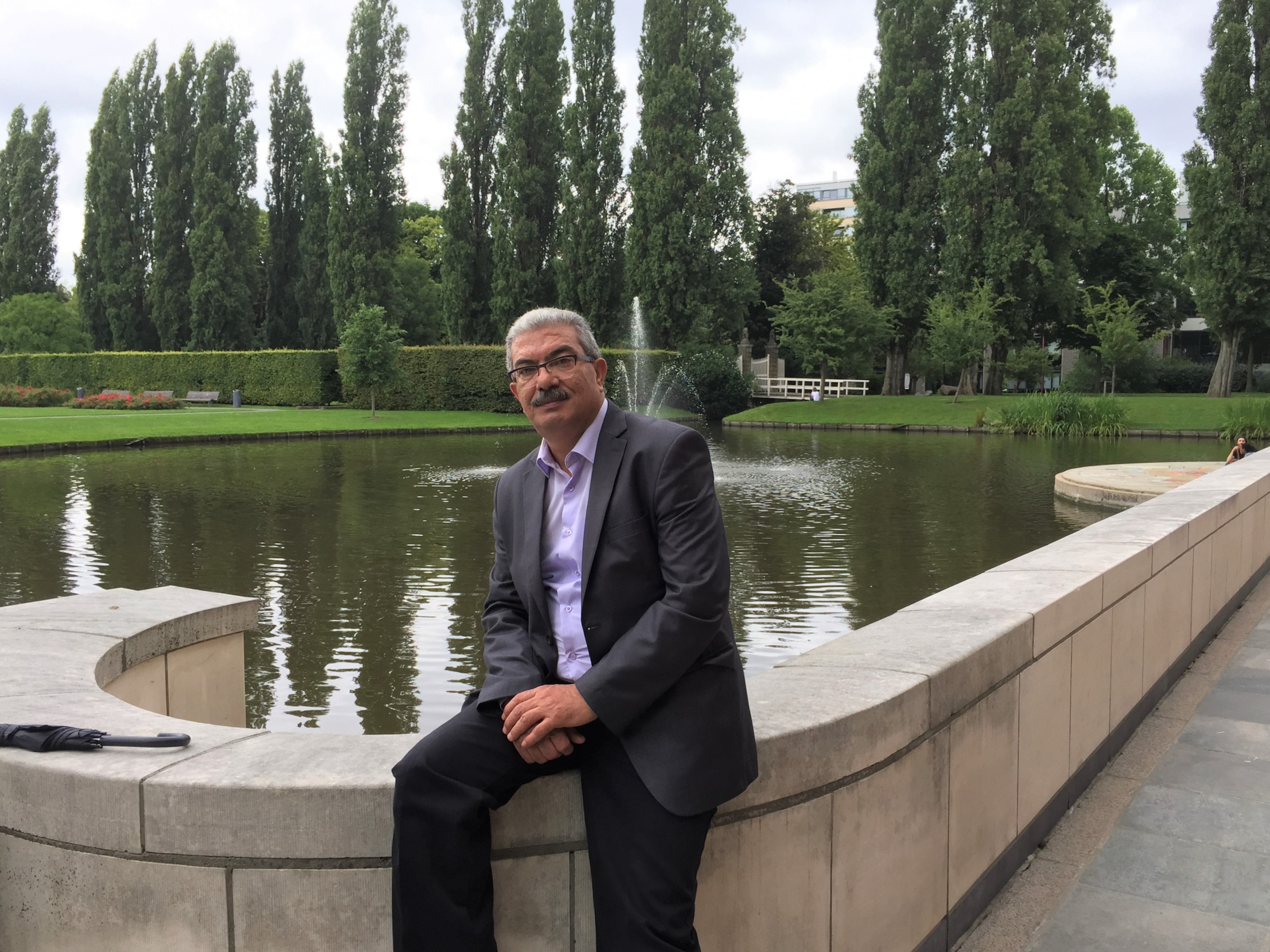 Most of the participants can return to their home countries without further difficulty. “They return with new energy and skills that enable them to be more resilient towards the challenging environment they are working in”, Suzan Goes explains. Occasionally, the deteriorated security situation in their countries does prevent human rights defenders from returning home. In such cases, individual solutions will be found: “For instance, one human rights defender from Gambia could not return, so we extended his stay and he enrolled in a study program at the University of Groningen. After this period, he was able to return to Gambia”, Suzan Goes recalls. Alexéy Zalensky and Iyad Haddad have returned home safely by now – as safe as they can be. “My future is unsure. No one can plan ahead for more than a day at a time, because of the obstacles the occupation provides”, Iyad Haddad explains towards the end.

Kiruba Munusamy remarks that although human rights defenders gain new energy and hope under the program, upon their return they are often stuck in the same environment as before, without much space for improvement. To keep their motivation alive, she suggests focusing one part of the program on potential initiatives in the participants’ home countries. “I was too enthusiastic and excited to do something big but was feeling a little down after my return. However, the things I have learnt helped me to overcome it”, Kiruba Munusamy remembers. Upon her return, she used her new skills of working for a collective goal to found the organization “Legal Initiative for Equality”. The initiative provides training to human rights defenders in order to prepare them for their work as minority advocates in India.

[1] Original title: Declaration on the Right and Responsibility of Individuals, Groups and Organs of Society to Promote and Protect Universally Recognized Human Rights and Fundamental Freedoms