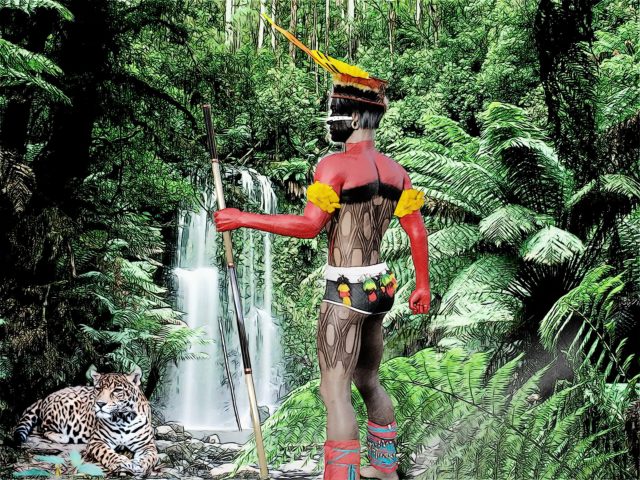 Violations of indigenous rights are not new in Brazil. However, during the pandemic it became a daily newspaper headline, highlighting just how common human rights violations are for many of Brazilian’s indigenous inhabitants. Since the Brazilian colonization by the Portuguese at the beginning of the 16th century, indigenous peoples have been suffering numerous human rights violations. In 1500, the year of colonization, there were 5 million indigenous people in Brazil. According to the latest official census, in 2010 there were only 817.973. They have been annihilated, forced to integrate into non-indigenous society, and suffering the loss of their lands. The colonizers forced the indigenous to change their culture, traditions, religions and beliefs in the name of Catholicism as they also did with Afro-descendant slaves. Furthermore, indigenous peoples also had to face infectious and parasitic diseases due to contact with Europeans. Diseases which they were not used to, such as measles and smallpox, killed thousands as they had no immunity to overcome them.

For centuries the indigenous people have continued to suffer grave human rights violations. These acts of violence were once again evident in 1964 when the dictatorship in Brazil began. Brazilian government initiated a National Integration Plan which aimed at expanding internal borders, building cities, roads and initiating raw material exploration. In order to achieve this goal, the invasion of indigenous lands was necessary. It resulted in mass murders, with at least eight thousand recorded indigenous deaths. There were also persecutions, sexual abuse of women and children, and torture of indigenous leaders who were protecting their lands and peoples. Large-scale projects such as the Trans-Amazonian Highway, the Belo Monte Dam, the construction of the Itaipu Hydroelectric Plant, and the Perimetral Norte highway were planned and built during that time. Those projects also resulted in the sale of indigenous goods and environmental destruction. The collected documents and reports made by the Brazilian National Truth Commission demonstrated the invasion of indigenous lands, forced removal, and also purposeful infections that caused epidemics among the indigenous people.

Despite the end of the dictatorship, indigenous peoples are still suffering from human rights violations. They suffer continuous and uninterrupted violence since the colonization and the current situation is not any different.

Indigenous and the COVID-19 Pandemic

According to the Socio-Environmental Institute (ISA), as of February 2021, the Coronavirus pandemic in Brazil killed about 1.000 indigenous people. Due to the fragile immune system of indigenous people and the lack of access to health services, the mortality rate of this group is much higher than that of non-indigenous people. This data demonstrates a greater need for protection from virus contamination for indigenous people. However, the Brazilian President had not presented any plans to contain the virus until August 2020, neither for the Brazilian population in general nor for the indigenous peoples. In contrast, since the pandemic’s beginning, the Brazilian President has been underestimating the virus. He has denied the importance of social distancing and the use of protective gear such as masks and sanitizer. Despite the World Health Organization’s (WHO) recommendations he continued to encourage crowds and act with contempt for the victims of the disease.

In some indigenous communities, the transmission started with (unknowingly) infected health professionals not being tested before entering the indigenous territory. In other cases, the transmission happened due to illegal invasion by miners and loggers into indigenous communities. In all cases, the government failed in its duty to protect indigenous rights. The communities decided to implement their own rules in order to prevent contact with non-indigenous people. The communities have constructed sanitary barriers on their community roads and prevented people from entering. However, it has not been enough, and the number of infected only increased.

In August 2020, the Brazilian Supreme Federal Court recognized that the government of President Bolsonaro failed to deal with the effects of the epidemic on Indigenous communities. The court ordered the creation of an emergency plan to protect the indigenous populations and also to adopt the necessary measures to remove invaders from their territories. However, the plan did not have the expected result. The rights of indigenous communities continued to be violated, there was not enough protective gear that had to be provided to the communities, there was a lack of hospital beds and assistance for indigenous people who do not speak Portuguese and the invasions kept happening.

During these chaotic periods, the environmental policies in Brazil have been dismantled, and indigenous people have been even more affected. Their own Environment Minister in a ministers’ meeting in 2020 was filmed calling for environmental deregulation while the public was distracted by COVID-19. Having gathered enough evidence to prove a failure by Bolsonaro to fulfill his duty to protect (the high) number of indigenous victims, indigenous leaders and human rights groups accused Bolsonaro of crimes against humanity and urged the International Criminal Court to investigate the case. Before that, the President had already been denounced in 2019 before the Inter-American Commission on Human Rights due to the violations of indigenous rights.

Bolsonaro is known for his speech underestimating the importance of the environment and showing a lack of consideration for the indigenous people. Speeches such as the one in which he compared indigenous living in reserves to zoo animals and his promise that during his government no land would be demarcated for indigenous and quilombolas communities. Quilombolas communities are a group of families descended from escaped slaves at the time of colonization who have been living together in a community until today. Those speeches encourage increased deforestation and invasions of indigenous lands, actions that are directly linked. Since Bolsonaro took the presidency in 2019 the indigenous territories’ invasions increased 135% just in one year. In addition, deforestation reached almost 50%, the highest level since 2008.

As long as the government itself goes against its people and its nature, there will be no progress on these issues. In order to address those violations against indigenous people and protect their existence, the environment in Brazil has also to be protected. Despite all economic threats such as the situation with the Mercosur Agreement and international boycotts of Brazilian products, the dismantling of environmental politics and violations against indigenous still happening. True punishment for the neglect of environmental policies and the destruction of the ecosystem in Brazil is needed, including holding large companies accountable. Investigations have to be conducted and criminalization of loggers, miners, and invaders of indigenous lands is necessary. Pressure from society is needed to demand that companies stop the deforestation of the environment and invest in sustainable technologies. Furthermore, in order to protect indigenous health, real public policies need to be build together with indigenous peoples, respecting their culture, religion and beliefs. It is necessary to respect the right of self-determination and provide possibilities to indigenous to fulfill decision makers positions. However, nothing of these is possible without the government’s support.

Jackeline was born in Brazil where she received a Bachelor’s degree in Law. She moved to Germany  to do a Master’s program in Human Rights. Her current focus is the intersection between human rights and the environment.